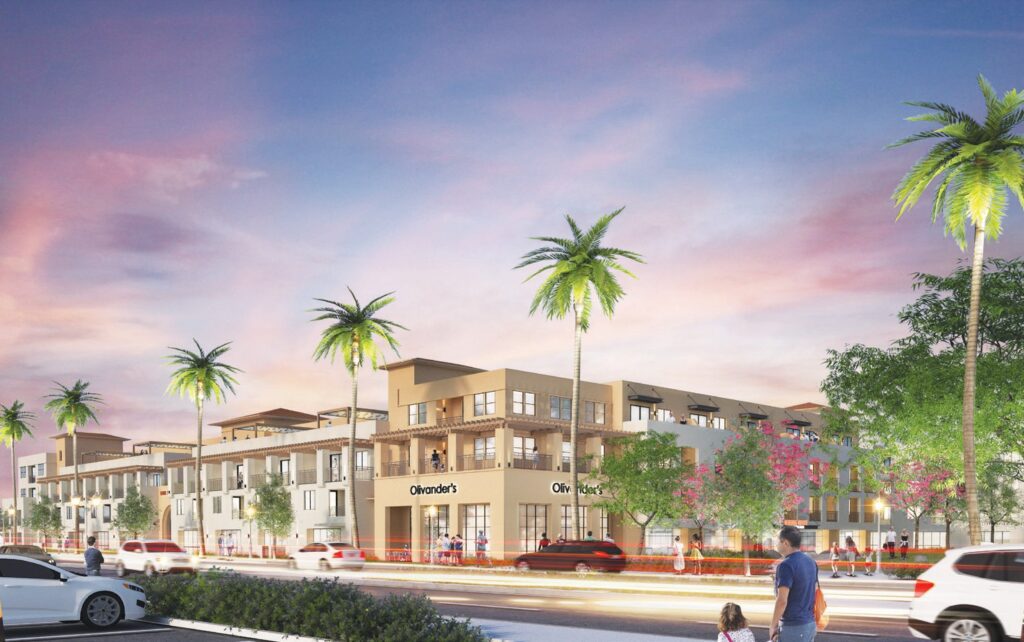 VISION—A conceptual rendering of the Santa Susana Plaza mixed-use redevelopment proposal as it would be seen from across Tapo Street at the corner. Courtesy of the Gerrity Group

City Planner Sean Gibson said the project presented to the council was the culmination of more than four years of work by Gerrity Group, the owner and operator of the plaza, to reenvision the space on Tapo Street just south of Cochran Street.

The planning commission Jan. 19 unanimously recommended that the City Council approve the proposal, which would subdivide the retail center into three parcels in preparation for redevelopment.

Although some businesses remain—including Walmart Neighborhood Market, AutoZone, and Joann—the majority of the retail spaces on the center’s north side have been vacant for a few years.

Under the government code, Gerrity qualifies for a 20% density bonus, modified parking requirements, and several waivers by designating at least 5% of the project’s total units for very-low-income housing.

The planning commission asked if additional affordable units beyond 14 could be added to the project. Gerrity representatives said that wouldn’t feasible, but said the project would be affordable by design because studio apartments are being offered.

Pedro Morales, a carpenter, and member of Camarillo-based Carpenters Union Local 805, asked the council to deny the project until a local worker hire provision was included.

“Residents from the city of Simi Valley should not be the last in line to get hired for a local construction project even if the contractor is coming from out of town,” Morales said.

When Councilmember Ruth Luevanos asked City Manager Brian Gabler if the city has a local hire ordinance in the building code, Gabler said the city didn’t and that even if it passed one, it wouldn’t apply retroactively to this project.

Councilmember Mike Judge said he agreed with the commenters and wished the builder would hire local people. He asked if it would be legal to reject a project based on that reason and City Attorney David Caceres said the council couldn’t require Gerrity Group to hire local workers.

“I really believe you tried to make this attractive to everyone who lives in that community,” she said. “The desire is for that (area) to have a downtown feel. I think you’ve given it a breath of air. We look forward to seeing it built.”

Later in the meeting, Luevanos asked staff to research the possibility of Simi adding a skilled local workforce hiring requirement and to find out how other cities are handling the issue.